Published By Alexandra Heilbron on May 24, 2022 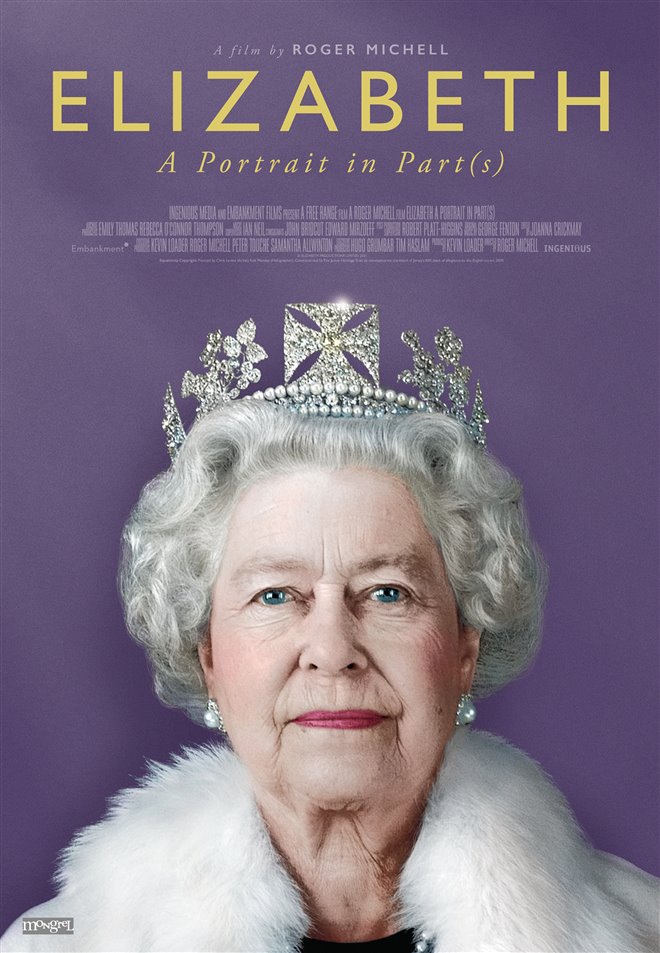 Elizabeth: A Portrait in Part(s) could be compared to a coffee table book, but instead of photos, it features film and video clips over the course of Queen Elizabeth’s life.

The film has 16 parts, beginning with “The Queen’s Speech,” in which we see her behind the scenes as she’s about to give her Christmas broadcast, right through to “Goodnight,” in which we hear a radio broadcast from when she and younger sister Margaret were children.

Even without having a lot of detail provided, we learn interesting facts about the Queen. She's 5'2" and her stand-in (who knew she has a stand-in?), who is 5' tall, goes through rehearsals of the Queen’s events so that the people who are involved can get ready and know where to stand and what to do before the Queen is brought in.

It’s clear through the movie that Elizabeth has many, many events, and each time she has to smile and greet people, make small talk and shake hands. She does it over and over, not just for the 70 years since she was crowned, but even as a toddler, when we see her graciously shaking hands as she meets people who tower above her.

Elizabeth was born into the royal family, but it wasn’t until she was 10 years old in 1936 that she learned she would one day be Queen. That was the year that England had three kings. Her grandfather died in January 1936 and on December 11, 1936, her uncle, King Edward VIII, abdicated to marry divorcée Wallis Simpson, leaving Elizabeth's father to ascend the throne as King George VI.

We get to have a look at Elizabeth having fun as well. She’s shown riding a pony as a child, obviously enjoying every moment. For official public occasions, we see that she rides sidesaddle, and on one frightening occasion as the Queen was riding down The Mall to the Trooping the Colour ceremony in London, a teenager fired shots, startling her horse. She quickly managed to get control of the horse, and remained calm as she looked around, likely wondering where the shots were coming from. Luckily, the man, who was only firing blanks to get attention, was apprehended, and the Queen continued her ride to the Horse Guards Palace.

In the section titled “Heavy is the Head,” a behind-the-scenes film of Elizabeth is shown as she discusses wearing the royal crown, saying, “Heavy? Yes it is. And you can’t look down to read the speech because if you did, your neck would break.” She places it on her head and remarks, “Fortunately, my father and I have the same sort of shaped head.” Taking her responsibility in stride, she sums it up, saying, “There are some disadvantages to crowns, but otherwise, they’re quite important things.” We also see footage from her 1953 coronation, which was the first royal event to be broadcast live on television.

In another video in which Elizabeth is about 12, we see that she was always a dutiful, loving daughter. She pulls a chair out for her father to sit on during a public appearance, and brushes his hair from his eyes before the event begins.

“Love Story” shows Elizabeth and her husband Philip at different times in their lives. In “Mummy,” we see her taking her grandchildren on a pony ride, but we’re also treated to a video clip in which George W. Bush winks at the Queen after nearly making a mistake while giving a speech. Upon seeing her reaction, he grins and jokes, “She gave me a look that only a mother could give a child.”

In another clip, an adult Prince Charles is presenting his mother as "Her majesty — Mummy." However, in this case the Queen looks less than amused.

There’s also a section titled “Horribilus.” The Queen famously called 1992 her "annus horribilis." That year, Windsor Castle experienced a devastating fire. It was also the year her daughter Anne divorced her first husband and the year Diana and Charles separated. Other devastating experiences for the Queen, such as Diana’s death and Prince Andrew’s failing marriage to Sarah Ferguson are included, while Andrew’s scandal involving Jeffrey Epstein is hinted at.

There are plenty of visuals to enjoy throughout the movie, even though there's not much detail of any of the events. It’s really simply a gorgeous look at the Queen from childhood to her incredible 70th year as a monarch, both in public and sometimes, in more private moments. ~Alexandra Heilbron

Elizabeth: A Portrait in Part(s) plays exclusively on May 25 and May 28 in select theaters.