Find out what's new on Netflix Canada in October 2019

Published By Marriska Fernandes on Sep 20, 2019 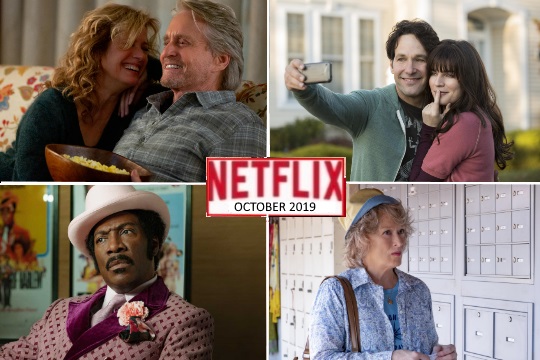 It’s time for pumpkin spice and all things nice (and scary)! With Thanksgiving, Halloween and pumpkin patch trips on the radar this month, there’s ample amount of family time guaranteed.

From Meryl Streep’s TIFF film The Laundromat to Eddie Murphy’s Dolemite is My Name, Netflix’s original slate of movies and series promises that there’s something for every kind of pop culture fan.

In Steven Soderbergh's The Laundromat, when a widow (Meryl Streep) is denied compensation after losing her husband in a ferry accident, she decides to personally investigate the insurance companies that have dodged her claim. If it's got Meryl, count us in!

Having a hard time living with yourself? Well, this Paul Rudd movie makes this phrase a literal phenomenon. Miles goes to a strip mall spa that promises to make him a better person. That doesn't sound shady at all?! He wakes up to find out that he's been replaced by a new and improved version of himself. Now he has to deal with the consequences in Living with Yourself.

In The Kominsky Method, Oscar winners Michael Douglas (Sandy Kominsky) and Alan Arkin (Norman Newlander) continue their journey as two friends tackling life’s inevitable curveballs as they navigate their later years in Los Angeles. In season two, Sandy meets and bonds with his daughter’s new boyfriend -- who is close to Sandy’s age. Meanwhile, Norman reconnects with an old flame from his youth and after 50 years, they decide to rekindle their romance. Click here to watch our interview with Michael Douglas and Chuck Lorre.

In the heart-pounding, psychological horror film Rattlesnake, Katrina is a single mother whose daughter Clara gets bitten by a venomous rattlesnake. Desperate to save Clara’s life, Katrina accepts the help of a mysterious woman, but after she miraculously heals the girl, Katrina is asked to repay the good deed by killing a stranger in exchange for the life saved. Whoa!

From executive producer Selena Gomez, Living Undocumented follows eight undocumented immigrant families who volunteered to tell their stories at great personal risk, revealing the high cost many must pay to try and live the American Dream.

Comedy
Girls Trip is a one comedy that will have you rolling on the ground. Note: not suitable to watch with the family. Regina Hall, Tiffany Haddish, Jada Pinkett Smith and Queen Latifah play college friends who decide to have a reunion in New Orleans. They're determined to have a good time in the Big Easy, going to dance clubs and living the wild life that they enjoyed in college. This one is pure #squadgoals.

How about a comedy from the '90s? In Liar Liar, comedian Jim Carrey plays a compulsive liar who’s forced to tell the truth for 24 hours as a result of his son’s birthday wish. Uh-oh!

For Thanksgiving, how about The Best Man Holiday? College friends finally reunite over the Christmas holidays, and they discover just how easy it is for long-forgotten rivalries and romances to be ignited.

Horror and Thriller
What's October without a splash of horror films? The infamous Amityville house, where a mass murder was committed years ago, is back to haunt fans in Amityville: The Awakening.

Seven follows Somerset (Morgan Freeman), a retiring police detective, and newcomer Mills (Brad Pitt), who are paired together to work on a brutal case involving a serial killer.

In Contagion, people struggle to survive a lethal airborne virus that kills within days. As the epidemic grows, the worldwide medical community races to find a cure and control the panic that spreads faster than the virus itself.

Fan Faves
Fan faves like Pride & Prejudice, Ant-Man and Justice League will also be available on the streaming service to watch and enjoy.

Here's everything coming to Netflix in October. Scroll below to see what's leaving the streamer.

October 21
Echo in the Canyon
Only the Brave